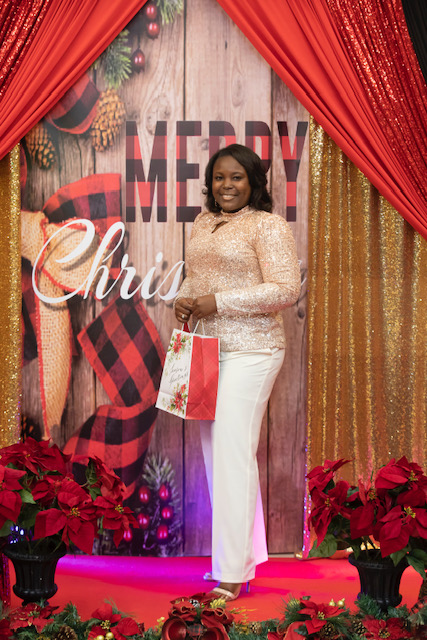 Brinkley is thrilled and humbled to have been chosen as the Jefferson County Career and Technical Center's (CTE) Teacher of the Year.  She currently serves in the capacity of the Family and Consumer Science Teacher for the Jefferson County School District. Brinkley graduated from Jefferson County High School in 2009, Alcorn State University in 2014 with a Bachelor of Science in Child Development, and the University of Southern Mississippi in 2016 (Master of Science in Child and Family Studies).  Brinkley is in her fifth year as a classroom teacher.  She began her teaching career in the fall of 2017 as a Family and Consumer Sciences Teacher at Crystal Springs High School, where she worked for two years before returning to her alma mater taking on the same role to be closer to home and contribute to the very community that watered her growth.

Brinkley is an usher, reader, and member of the Knight of Peter Claver Ladies Auxiliary at St. Anne's Catholic Church in Fayette, Mississippi.  She is an honorary member of Greater Mount Zion Baptist Church in Rodney, MS.  She is a member of Zeta Phi Beta Sorority, Incorporated (2011, Zeta Chapter- Alcorn State University, former president), (2014 - current Delta Chi Zeta Chapter, Fayette, MS).  Brinkley is an advisor for the Zeta Archonette (Youth Zeta affiliated auxiliary) and the Family Career and Community Leaders of America, a Career and Technical Education student organization (FCCLA).  She is a co-owner of GameOn! Mobile Arcade.  She enjoys planning and organizing events, spending time with her family, and traveling in her leisure time.Brinkley's legacy traces to education as far back to; Her grandfather, the late Robert Lee Williams, Sr., after whom the Jefferson County Administration Office is named, was the first African American elected to public office in Mississippi since Reconstruction (1966), as well as the first African American elected to the Jefferson County School Board of Education by official ballot.  Her paternal grandmother, Carrie Lee Brinkley, taught for over 30 years at the AJFC Community Action Agency in Fayette, MS.  Her mother, Shelia Williams- Brinkley, was a teacher for 29 years, retiring from A.W. Watson Elementary School.  Brinkley was influenced by her grandfather's commitment to education and her grandmother and mother's educational practices, and she now follows in their footsteps.  Brinkley states that a chain of command contributes to her success and success to come.  She acknowledges God and her parents (Samuel Jr. and Sheila Brinkley) in her accomplishments, while she insists that their parenting poured the stable foundation that she builds on each day.Brinkley approaches each day in the classroom with vigor and eagerness to see what the day has in store for her beyond her lesson plan.  Brinkley is a great believer in seizing teachable moments that arise naturally during a prepared session.  She believes that some of her most effective teaching methods take place unintentionally; an instruction that is not planned yet has such a profound impact on her students' learning.Brinkley expresses her enthusiasm for her role as a CTE instructor.  She states that during her time at Alcorn State University, she had a strong desire to teach and mold the gentle minds of young children in grades Pre-K–1, but she realized that God had a different plan for her, which led her to teach young adults in grades 9–12. God's plan, she said, is still unfolding day by day.  According to Brinkley, if she had followed her plan, she would not have had the opportunity to serve in such a diverse manner as she does in CTE. Brinkley's passion for CTE grew as she began her teaching profession and saw the greater impact she could have on young adults who would soon be entering the complex world we live in.  She feels that the CTE was the ideal fit for Brinkley and her colleagues because it enabled them to give children the necessary skills and methods to succeed in the workforce and post-secondary education.  CTE programs, she says, focus on career readiness, emphasizing essential employability skills that are in high demand right now.  In today's job market, "soft skills" such as attention to detail, good communication, and critical thinking are in high demand.  She explains that as more emphasis is placed on college and career readiness, her desire to meet every expectation outlined in the Jefferson County School District's vision and mission statement to prepare every student she encounters- directly or indirectly- in her teaching profession.

"Ms. Shalonda Brinkley has dedicated her life to educating others," said career and technical education director LaRondrial Barnes.  "She has been a tremendous asset to the JCSD.  A product of the district, she has strived to lend herself to which shows the type of dedication and passion she has brought to the Jefferson County Career and Technical Center.  She never complains about much but seemingly is always up for a challenge.  Her teamwork and work ethic are impeccable traits that have brought her to this early high point in her career.  We at the JCCTE Department salute our Teacher of the Year and candidate for District Teacher of the Year, Ms. Shalonda Brinkley."